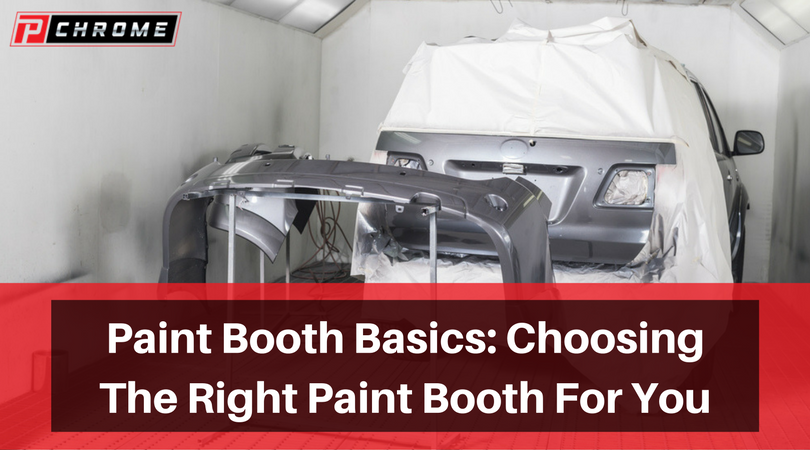 How To Choose The Perfect Paint Booth

It can be a little tricky to choose the right paint booth. This term is a broad one and can mean anything ranging from a basic space with a fan to a high-production booth with many additional systems and features incorporated in it. Depending on your needs, you may want a high-production paint booth straight out of the gate or a basic setup that can grow with your business. Here is what you need to know about choosing the best paint booth to meet your needs.

If your business is a startup that is looking for a basic booth, you should consider what is right for your business now as well as what will be needed in the future. There are four main types of paint booths, and each type has its pros and cons.

With a cross-draft paint booth, air is sent directly across the object or vehicle that is being painted. This type of paint booth is the most popular because it is the cheapest way to meet codes for people painting in their shops. Incoming air is drawn through the main doors of the workspace. Exhaust occurs through the back walls.

The primary advantage of cross-draft paint booths is that they are economical.
Crossdrafts are very economic for two specific reasons. Because of the way in which they are constructed, they require very little construction material. These booths also do not need concrete work in order to properly function.

A disadvantage of a cross-draft paint booth is that the air draft’s shape is not ideal. This is because it follows a linear path across the entire object. If there is a speck of dust present in the airstream, it has more surface area to cover before it exits the paint booth. Contaminants have a higher chance of landing on the finish because of this.
The person who is painting will also be in the way of the airflow, which may cause paint overspray to travel around the painter in order to exit the booth.

A semi-downdraft paint booth works similarly to a cross-draft booth because the exhaust still occurs at the rear of the workspace. However, the incoming air is introduced into the booth through a small section of the ceiling that is located at the booth’s front. The draft pattern will be directed diagonally from the ceiling’s filtered area to the exhaust area.

The semi-downdraft paint booth has an advantage over the cross-draft booth because the incoming air follows a somewhat downward diagonal. It is also an economical choice because it doesn’t require concrete work to be completed.

Painters will still likely be in the way of the draft and may be exposed to overspray. The diagonal shape of the line can also create a dead zone at the front of the booth that gets very little airflow. In order to combat the problem, you will need to position the area that will be sprayed toward the back of your booth to get the best airflow.

In side-draft paint booths, air is introduced through the ceiling and is exhausted through the side walls. The whole ceiling or the vast majority of it is filtered.

An advantage of side-draft paint booths is that a more even airflow pattern around the object is created. Paint overspray and contaminants are drawn down and away from the finish. They also do not require concrete pits, bringing down the costs.

Side-draft booths are normally the most expensive type because of the construction methods that are used. The expense may be justified because the concrete work isn’t required and the draft pattern is superior when compared to a semi-downdraft or cross-draft both.

Downdraft paint booths have air inflows that are drawn straight down from the ceiling. These booths may require concrete pits, or they may be installed on steel basements that have drive-up ramps.

The primary advantage of downdraft paint booths is their cleanliness. The air is drawn down around the object and is exhausted underneath it. Overspray and contaminants are pulled down and away from the object regardless of where the painter is spraying. The risk of contamination is reduced, and the painter has a lower risk of exposure. The finishes are generally better and have diminished needs for correction or buffing when they are dry.

These booths must have tunnels and pits to function. Alternatively, the manufacturer may offer a design that has the booth and mechanicals installed on a raised steel basement with a drive-up ramp. Regardless of the option, the booths will carry substantial costs.

You will also want to consider the cost of adding heat and bake capabilities if you are thinking about purchasing a non-heated paint booth. Custom shops might not need these upgrades, but if you think that volume will become a part of your business model, you will need to do so. When you are adding heat to your paint booth, recycling the heat is important because of saving thousands of dollars each year.

Semi-downdraft booths are relatively easy to retrofit to add heat. Very little metal customization or onsite work will be necessary, keeping installation and labor costs relatively low. Adding heat recycling will be expensive and difficult because of the location of the exhaust at the rear of the paint booth. It would require substantial amounts of ductwork.

With downdraft booths, it is easy to add both heat and heat recycling, depending on the layout. The installation and labor costs should be kept down because modifications to the cabin will be unnecessary.

Make sure that you have enough room around the booth that you choose to add heat in the future. Make certain that your building has the appropriate electric load and where the power will need to be run so that you can figure out what your costs may be. You will also need to make certain that the fuel to run the booth will be available and able to be brought to the heater. Ahead of time, make certain that adding a heater will be allowed by your city even if you have no plans to purchase it until sometime in the future. By taking the time to consider everything, you can save your business money and time in the future. If you have any questions, contact PChrome today.